This series was first developed in 2016 as a collaborative effort among the Clearinghouse Research Center, the Community College Research Center (CCRC), Columbia University, and Aspen Institute’s College Excellence Program.

Starting in 2017, the Clearinghouse Research Center annually updates the key metrics, with which to benchmark and measure progress and completion for transfer students from two- to four-year institutions.

The 2020 update shows that of those who began postsecondary education at a community college in fall 2013, lower-income students were half as likely as their higher-income peers to have transferred to a four-year institution (24% vs. 40%) and to have attained a bachelor’s degree (10% vs. 21%) within six years of first entry. 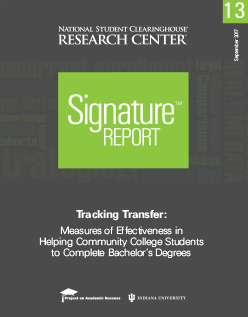 The CCRC released an analytical guide for community colleges to monitor and evaluate their own transfer bachelor’s degree outcomes using degree and enrollment data from the National Student Clearinghouse. The first part of this two-part guide provides instructions on how to identify the cohort, prep the Clearinghouse Research Center data files for analysis, and calculate the outcomes included in the Tracking Transfer Report Series. The second part provides suggestions on the methods that institutions can use to evaluate the effectiveness of transfer partnerships (learn more).