In December 2013, the National Student Clearinghouse Research Center will release its second college completion study, covering the cohort of first-time students who started in postsecondary education institutions in fall 2007. The study will present postsecondary outcomes for an expanded cohort of students that includes dual enrollment students — those who have previously enrolled in college courses while still in high school. As a result, it is worthwhile to bear in mind a few points that will be different from the first completion study released by the Research Center in November 2012.

What You Will Find in this Signature Completions Extra Report

In the following brief discussion, we present six-year outcomes for the fall 2007 cohort using the same cohort definitions used in the first completions report for the fall 2006 cohort (excluding dual enrollment students from the cohort). It is our hope that presenting the data in this way will enable a direct comparison with the findings from the first completion study released in 2012.

A Note on Data

The data for this report were drawn from the StudentTracker® and DegreeVerify℠ services, administered by the National Student Clearinghouse® (The Clearinghouse), which tracks 95 percent of college enrollments nationwide across all postsecondary institutions, including all institution types: two-year and four-year institutions, public and private institutions, and nonprofit and for-profit institutions. 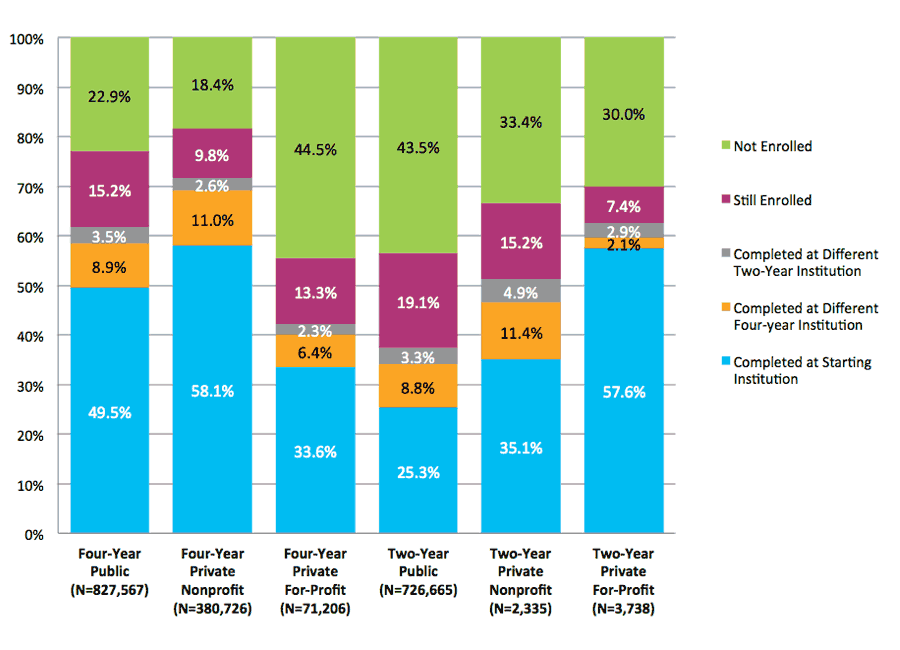 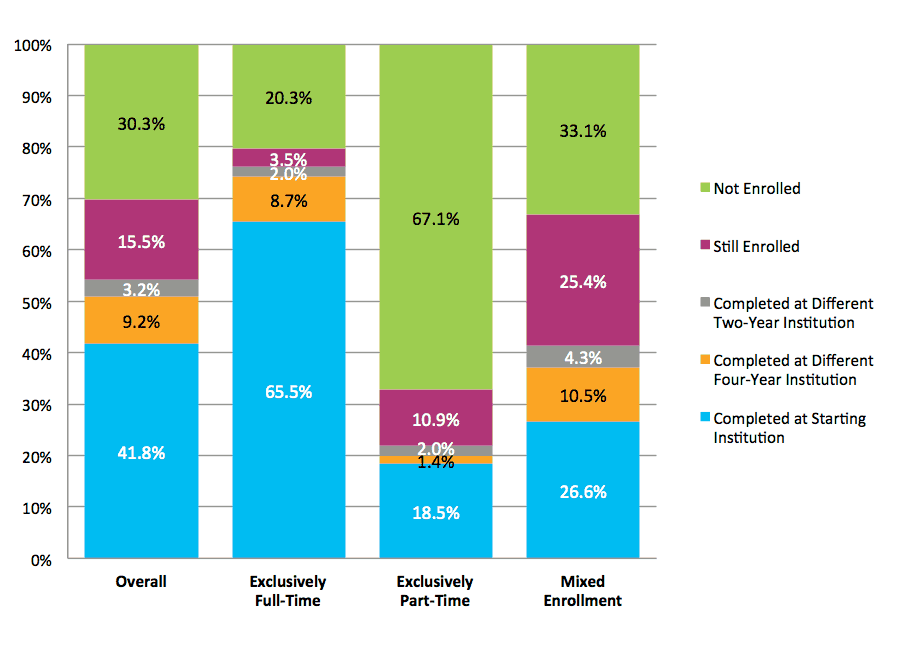 Figure 2 shows six-year student outcomes, including first degree or certificate completion, continuing enrollment during the last year of the study period, and stop-out by enrollment intensity.

Mixed enrollment students, a group that comprised more than half of the full cohort, had a total completion rate of 41.4 percent: 26.6 percent completed first at their starting institution and 14.8 percent completed first at a different institution. Another key finding is that the highest proportion of students still enrolled without completing a degree or a certificate by the end of the study period appeared among mixed enrollment students: one-quarter of this group (25.4 percent) were still enrolled at the end of the study period, leaving the percentage of stop-outs at 33.1 percent. 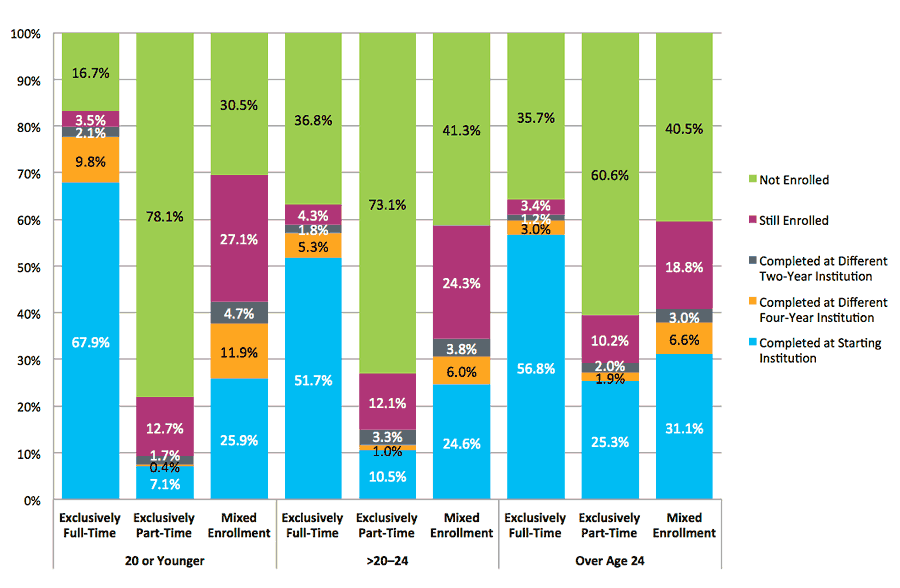 Note: Students with date of birth data missing were excluded from the above figure.

Figure 3 shows students’ six-year outcomes based on age at first entry and enrollment intensity. Not surprisingly, completion rates were the highest for exclusively full-time students regardless of age at first entry. Among exclusively full-time traditional-age students, 79.9 percent obtained a degree or certificate within six years, with 67.9 percent completing first at their starting institution and an additional 12 percent completing first at a different institution. Exclusively full-time students in the adult learners group showed lower completion rates both at their starting institution (56.8 percent) and at a different institution (4.2 percent).

Nonetheless, a comparison is possible because:

Therefore, the results for traditional-age students across the two studies are still comparable.

This Signature Completions Extra demonstrates that the overall completions rate for the entering 2007 cohort remained unchanged from the rates for the 2006 cohort, released in the first report in 2012. Nonetheless, there were small improvements for students who started at specific institution types, notably four-year publics and two-year publics.

The upcoming second Signature Completions Report will present many additional new findings and enable comparisons with the previous cohort. It will also inform public policymakers and the general public about six-year outcomes for the expanded cohort that includes dual enrollment students. The second completion study will also contain completion and persistence rates broken down by subgroups that were not present in the first study, including by gender and other combinations of gender, age, and enrollment intensity.

The authors would like to thank Vijaya Sampath, Jason DeWitt, and Diana Gillum from the National Student Clearinghouse Research Center and Robin R. LaSota from University of Illinois at Urbana-Champaign, for their efforts to make the Clearinghouse data analysis-ready and sharing their deep knowledge of the data with the authors. Of course, any remaining errors or omissions are solely the responsibility of the authors.