Of all associate degrees earned in 2008-09 that were reported to the National Student Clearinghouse, 488,046 were found to be the first postsecondary credential earned by a student. Forty-one percent of these students went on to earn a bachelor’s degree within six years.

For each entering cohort year, the overall persistence rate is about 11 percentage points higher than the retention rate. Thus, about one in nine students who start college in any fall term transfer to a different institution by the following fall. 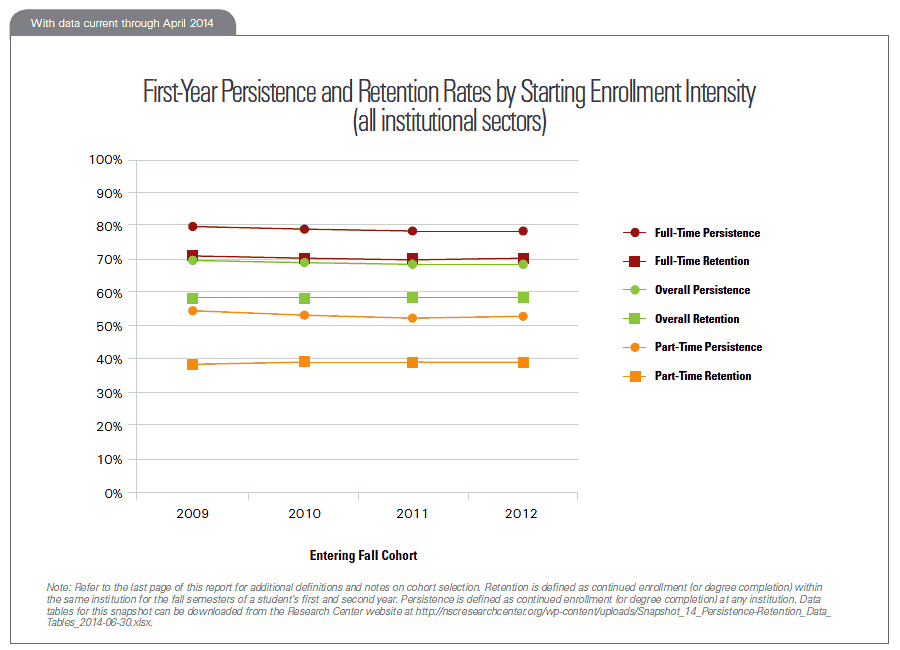 For students who are age 20 or under at college entry, the persistence rate has fallen 1.8 percentage points since 2009, while the retention rate has remained nearly constant. 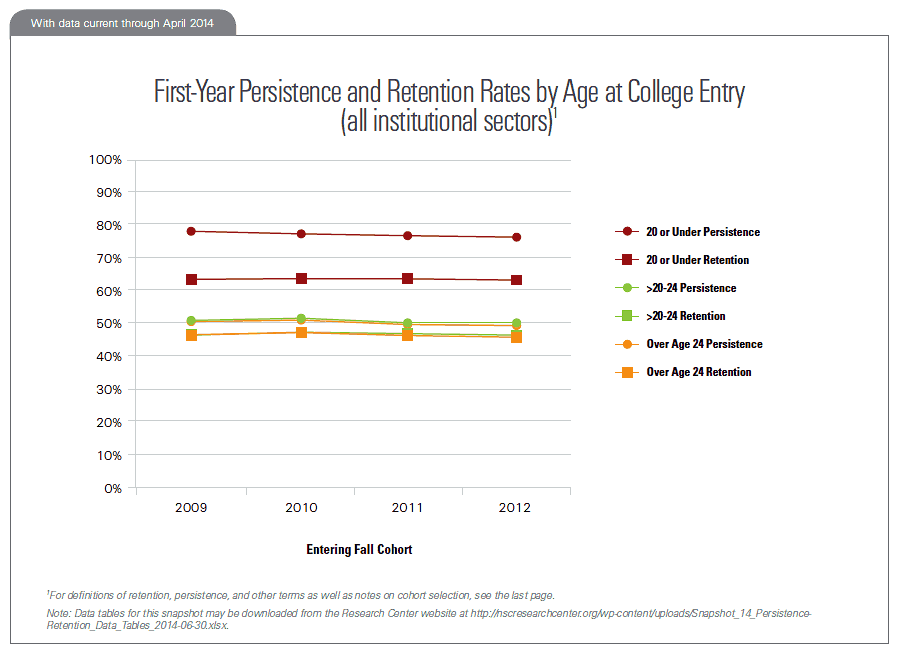 The overall persistence rate for students who start college in the four-year public sector has fallen 2.3 percentage points since 2009, while the retention rate has dropped 1.0 percentage points. 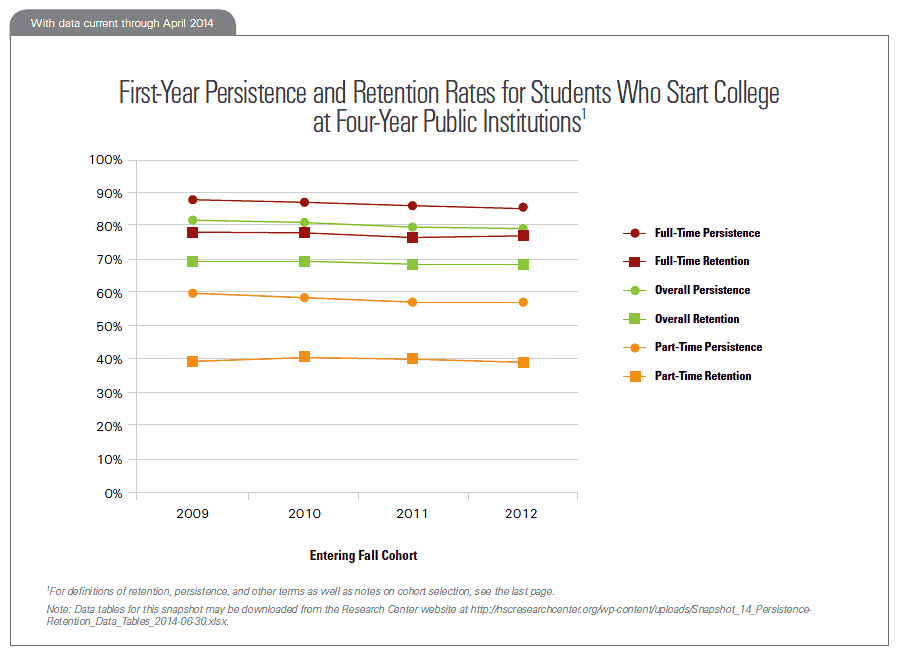 The overall persistence rate for students who start college in the four-year private nonprofit sector has fallen 2.8 percentage points since 2009, while the retention rate has dropped 1.1 percentage points. 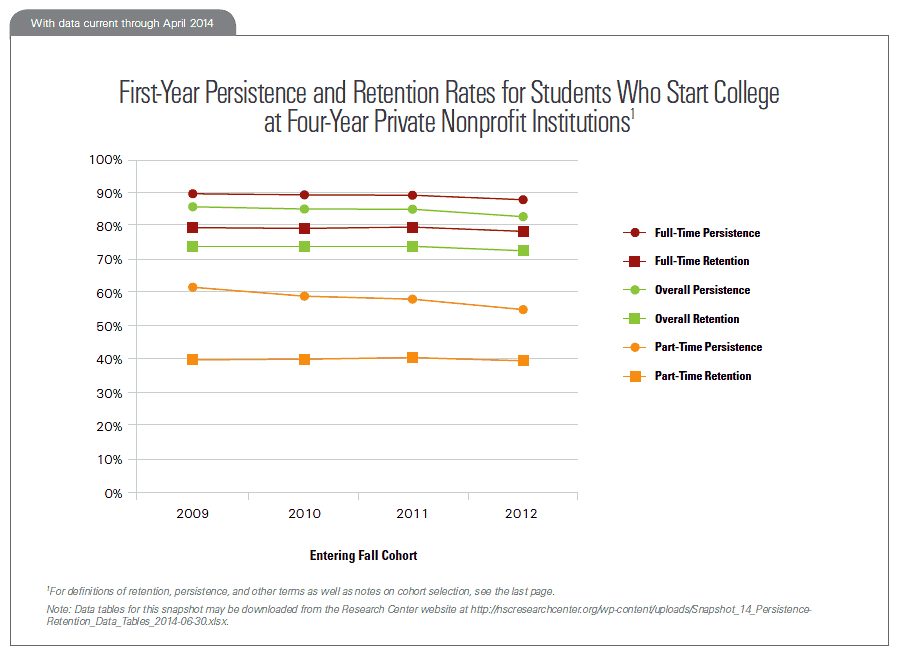 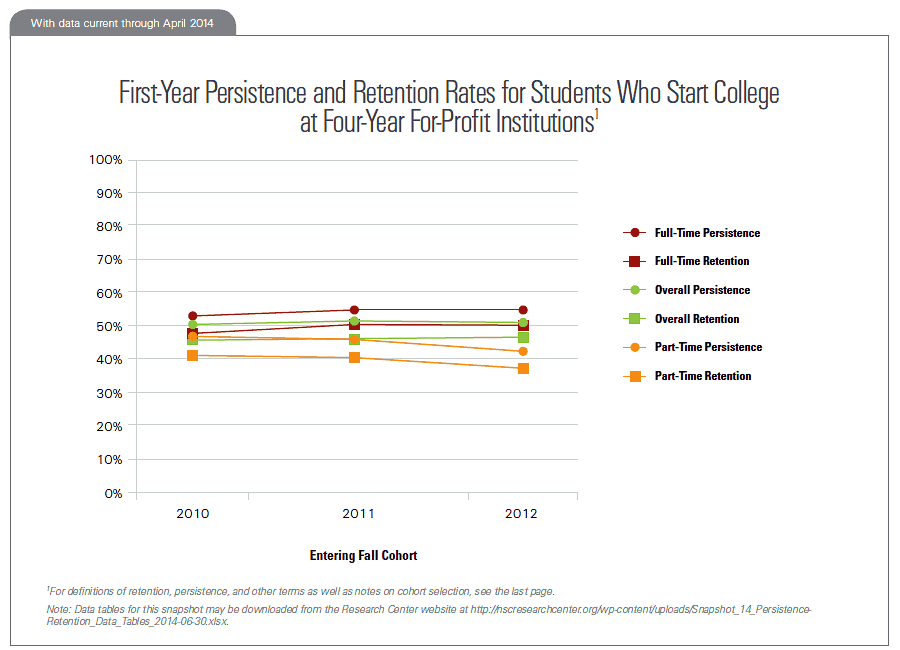 Note: Due to reporting changes, the fall 2009 entering cohort is not directly comparable to subsequent cohorts in this sector, and is therefore excluded from this chart. However, institutions from the for-profit sector are included in the overall results for the 2009 cohort.

The overall persistence rate for students who start college in the two-year public sector has fallen 2.3 percentage points since 2009, while the retention rate has dropped 1.1 percentage points. 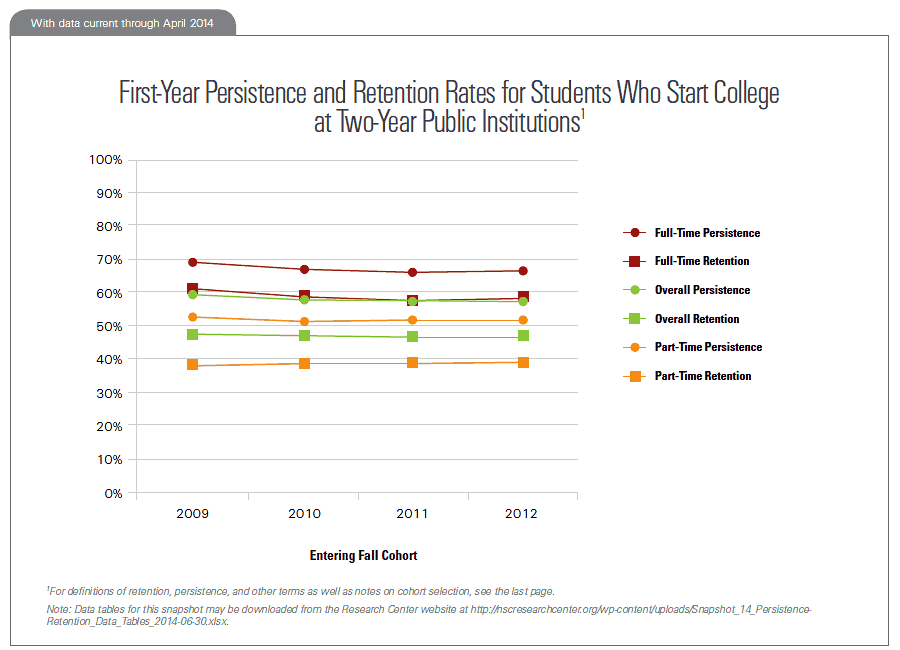 Definitions and Notes on Cohort Selection

Retention – Defined in this report as continued enrollment (or degree completion) within the same higher education institution in the fall semesters of a student’s first and second year.

Persistence – Defined in this report as continued enrollment (or degree completion) at any higher education institution — including one different from the institution of initial enrollment — in the fall semesters of a student’s first and second year.

Enrollment Intensity – A student is classified as having started college in a full- or part-time status based on his or her earliest reported enrollment intensity within the entering fall term. The part-time grouping comprises half-time and less-than-half-time students, some of whom may be non-degree-seeking.

First-Time Status – This report uses historical Clearinghouse enrollment and degree data to confirm that students included in the study (1) showed no previous college enrollment in the four years prior to the entering cohort year and (2) had not previously completed a college degree. In order to reliably identify students with prior enrollments, this report is limited to institutions that began submitting enrollment data to the Clearinghouse for terms beginning on or before June 1, 2005.

Included Institutions – This report is based on a fixed panel of institutions for all four starting cohorts. These are U.S. Title IV degree-granting institutions that have been submitting student enrollment data to the Clearinghouse since at least June 1, 2005.

Degree-Seeking Status – The retention rates reported by IPEDS are limited to degree-seeking students. This report differs in that it includes all entering students.

Fall Enrollment – A student is counted as having been enrolled in the fall if they were enrolled for any length of time in a term that began between August 13 and October 31, inclusive.

Sponsored in part by the Lumina Foundation, committed to enrolling and graduating more students from college.