The state-level completion outcomes for the fall 2013 entering student cohort largely correspond to the patterns found in the national report. Most states saw steady, across-the-board gains in overall completion rates. Completion rate disparities among the states narrowed, while nearly every state trended upward. Students starting at community colleges made stronger gains than public four-year starters, and some states improved completion outcomes for racial/ethnic minorities at higher rates than overall.

The Completing College report series provides a comprehensive overview of postsecondary completion trends nationally and by state. For all students who enter postsecondary education for the first time each year, it examines the diverse pathways the student traversed toward completion, as well as a degree or certificate completion rate within six and eight years of enrolling.

The completion rates account for all students who enter postsecondary education for the first time each year, enrolling full-time or part-time at two-year or four-year institutions, and completing at any U.S. degree-granting institution. The results include those who complete after transfer, not just completions at the starting institution. Thus, the report more fully captures today’s students’ diverse pathways to success, that increasingly involve mobility across institutions and across state lines, re-entry after stop-out, and changes in enrollment intensities. 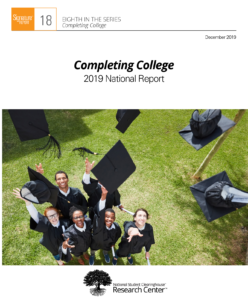